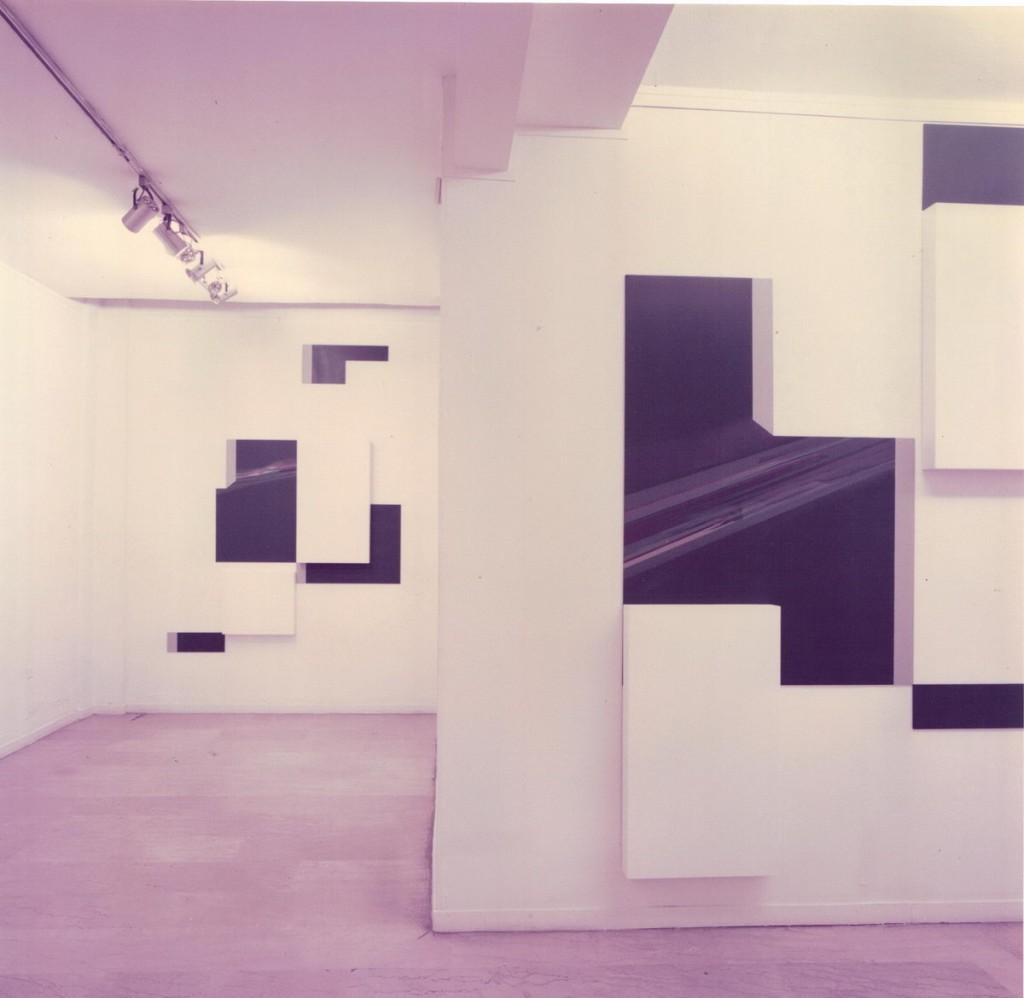 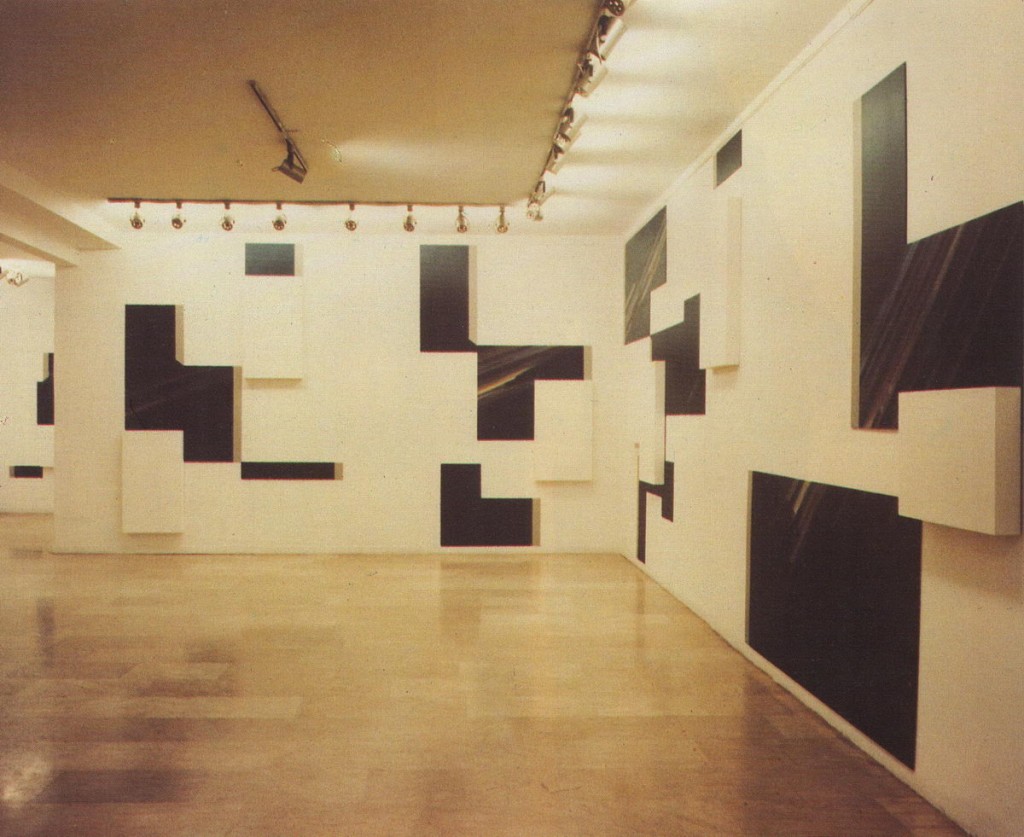 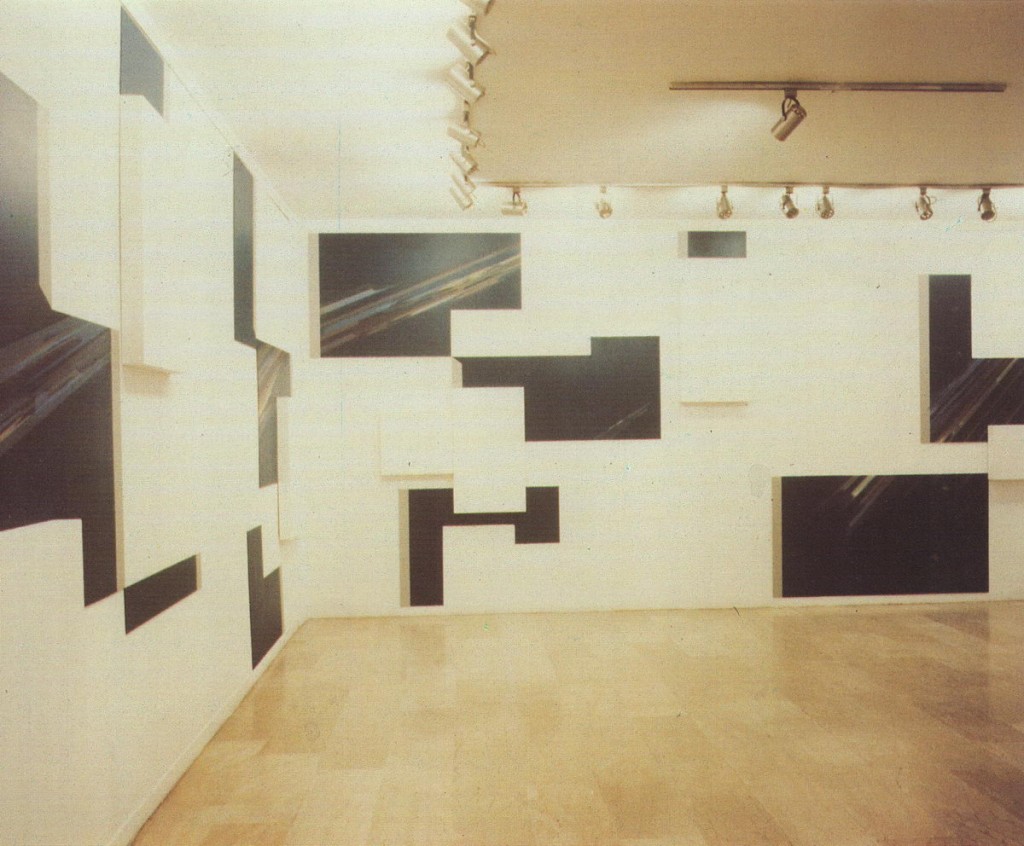 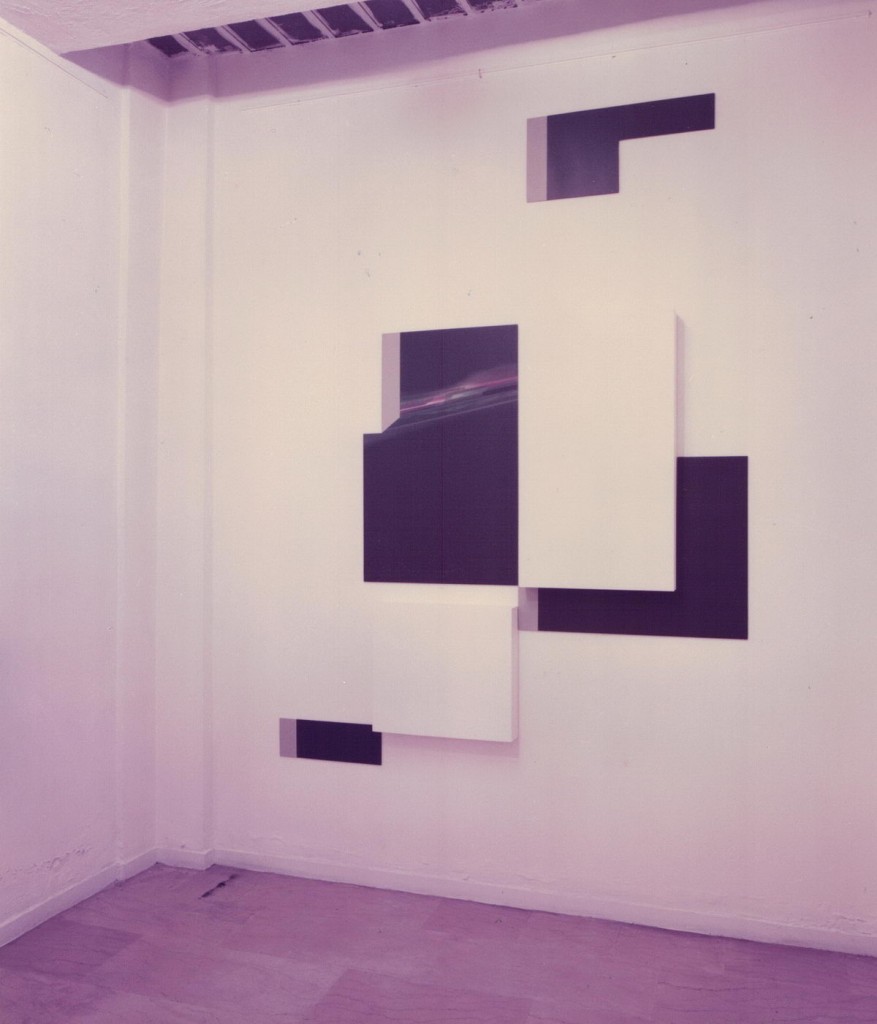 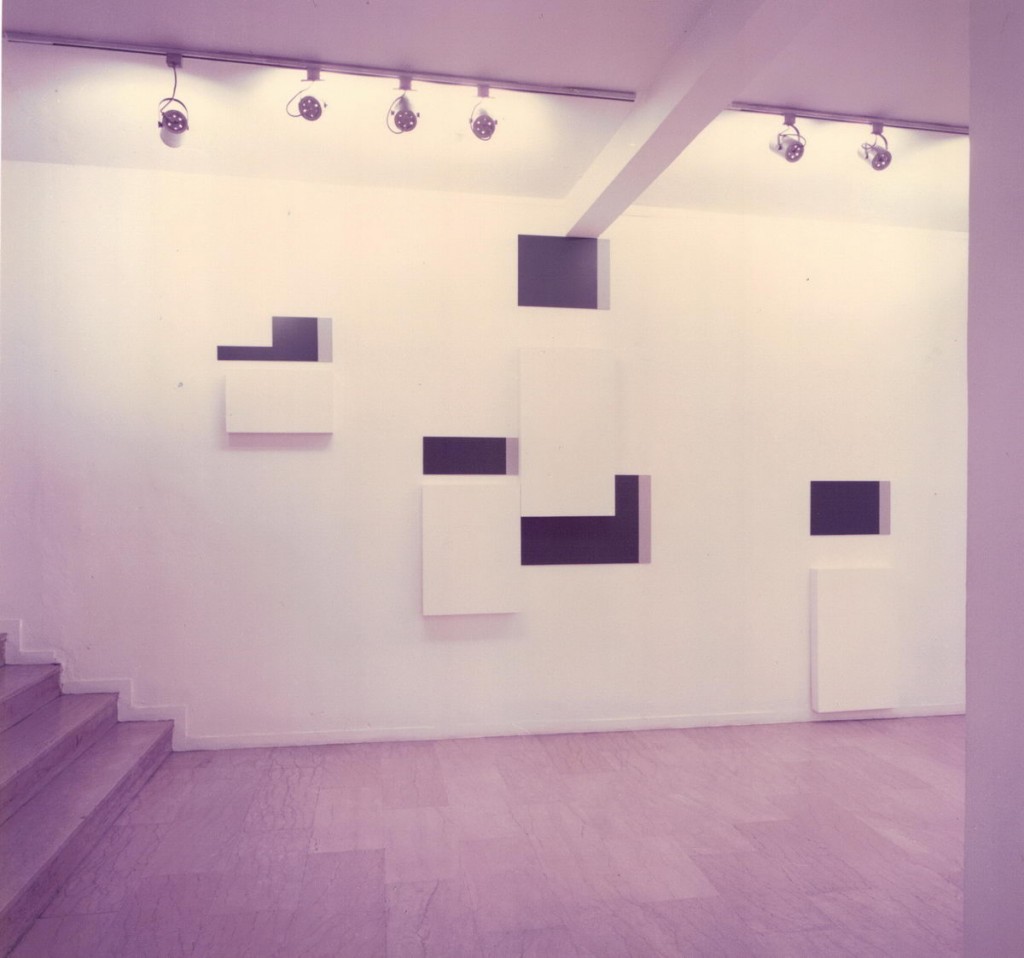 In her recent work-installation, Irene Apergi follows an excellent rhythm in developing levels and painted surfaces which cover the walls of the exhibition hall. It looks like a vast fresco which has been covered but revealed in the same time through several rectangular openings. This alternation between white rectangular and painted surfaces recalls the “painting’s element” to Apergi’s work, the care for colours and for artistic composition, while in the same time it preserves everything that she has achieved by her research and expression in space.

Among the various exhibitions I have visited recently, I have much appreciated the “picture-environment” Irene Apergi has created in “Medusa”. By defining the “in” and the “out” of space, determining the relationship between painting and constructing. Apergi organize a “happening” in a very conceivable and extremely sensitive manner. Viewing it from another angle, she added to this happening the dimension of permanence and the charm of pure reasoning.

From her first personal inquiries until today, Apergi moves with seriousness and consistency in the space of constructivist researches. Malevich especially, seems to be her great teacher, the beginning and foundation which she continues and erects with originality and responsibility. For the supremalist artists, the actual, realistic element is useless: they replace it with regular geometric designs, with organization, order, mathematics – and there they search for harmony, the highest aesthetic emotion. These general characteristics in the work of Apergi are easy to verify, they impose themselves on the viewer and safeguard her personal voice.
The three dimensional geometric designs that circulate in the metaphysical space of her canvases, give the impression of objects without gravity, that is, of forms outside realistic conditions. These same designs in her most recent work become actually (and not as illusions) three – dimensional, that is, they acquire existence in space, they become the vocabulary of forms with which she organizes an installation in the space of the Gallery “Contemporary Engraving”. That work, significant not only for her personal career but for the history of suprematism itself, becomes the cause for further form-moulding conquests. Thus with the “River” we have a freer movement in space, the opus spreads in the whole room, and the movement of the small formative units (in irregular designs this time) creates a sense of transitoriness. Already from this opus, a differentiation may be observed between the shape of the small works and the form painted within them a characteristic that becomes a beginning for the present work.
In this composition, the physical space of the room undergoes the transformation brought about by a series of canvases hung on the walls, not only in order to be exhibited as autonomous works, but also to create the impression of windows facing outwards. This ambiguity of the installation is conclusive, since it gives simultaneously two aspects of the same operation: the work of art as a field of expression, and at the same time, the work of art as a window on the world. In the second case, we have an accurate allusion to the historical detachment of the work of art from the place of its construction- an element that states a basic historical fact of the post- 16th century western art- a detachment that Apergi attempts to restitute by making the opus appear as a part on the wall and simultaneously an autonomous expressive unit. If on the other hand, we consider each canvas as an autonomous opus, then we are led to other interesting observations, as for example, that the outline is not regular (e.g. square), but a derivative shape made out of smaller regular ones, and consequently, that it denies its functions as a decorative canvas, a usage to which are necessary reduced all artistic works that are hung on the wall.
Thus, in the installation that Apergi develops, the messages outstrip the constructivist beginnings, from which doubtless they retain the vocabulary, but advancing towards successful allusions regarding the function itself of art in space. Therefore, the multiplicity of meanings which her opus offers is its basic characteristic, in spite of the very frugal means of expression employed. Indeed, this is what secures its truth, its seriousness and its unquestionable originality by international standards.

THE SKY OF IRENE APERGI

Irene Apergi builds space and time: two dimensions of reality, the relationship of which recalls that of sun and water in nature. It is the interminable action of space in time (and conversely), an action that consecrates these two philosophical meanings as artistic values, but without ceasing to remind us of their pre- artistic hypostasis. Apergi uses in “Sky” not only the possibilities offered by their existence as artistic values, but also their function as constituent elements of the reality that surrounds her. A reality that loses for a moment its prosaic romanticism in the artistic process, and when it reappears as a result of this process, it is charged.
Enriched with the enchantment of the fortuitous and the necessity of the accomplished event. Together with the space and time, another element is incorporated in her hypostasis: movement. A movement, which either as fall or flow, is not dynamic or impetuous. Perhaps it does not have the function which the Futurists gave to tit in their works. Here it an uncontrolled happening, harmonious, natural. It is the fortuitous that captivates, transfers, colors, what in a few places of the opus does not exists by itself, but where the results appear, the transfer of volumes. The three elements already distinguished, space – time – movement, have an organic relationship with each other. The last is the resultant of the first two, transforming time and space into sensual objects (that is comprehensible through the senses).
Thus the modification of their existential hypostasis puts forth simultaneously in a sensual reality, the artistic values that define the parameters of Apergi’s work. With this opus, the artist conceives, transforms and proposes a transcendental reality. But a reality bound to that well known one which surrounds us, with bonds that continue to exist. The reason is that the character of Apergi’s artistic values is the same, whether these function in a real or transcendental world. It obliges us to tread on the interspace of the existent and the postexistent.