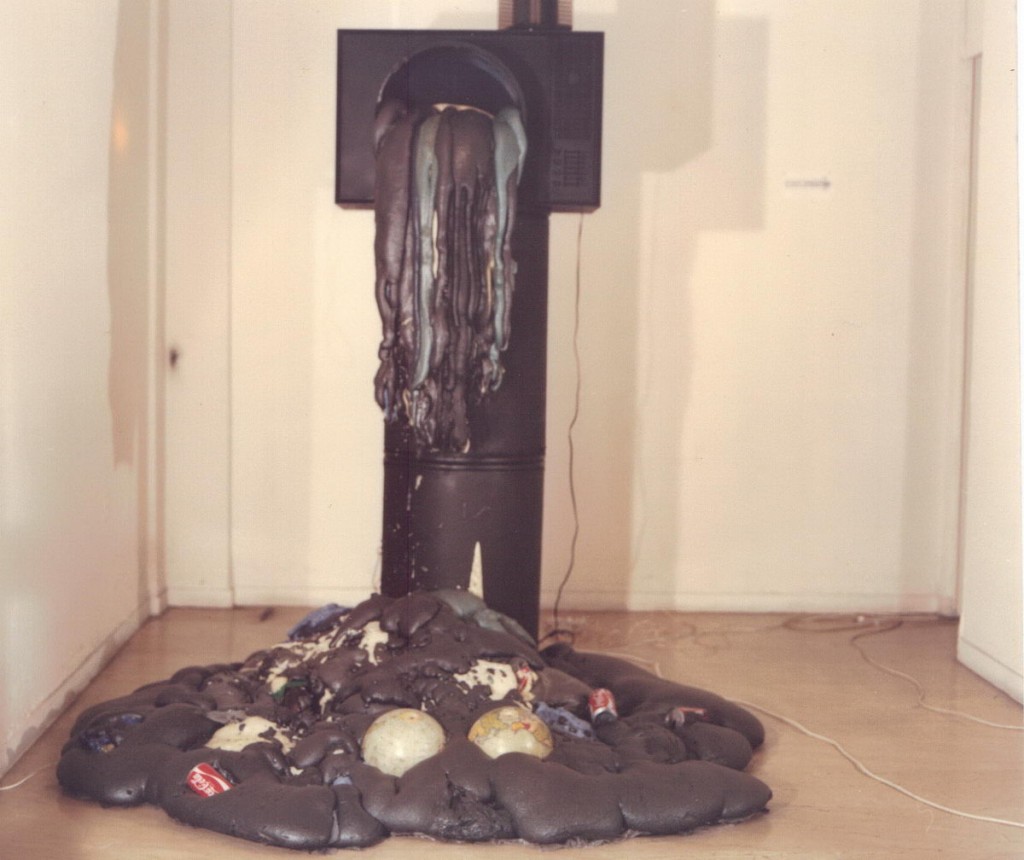 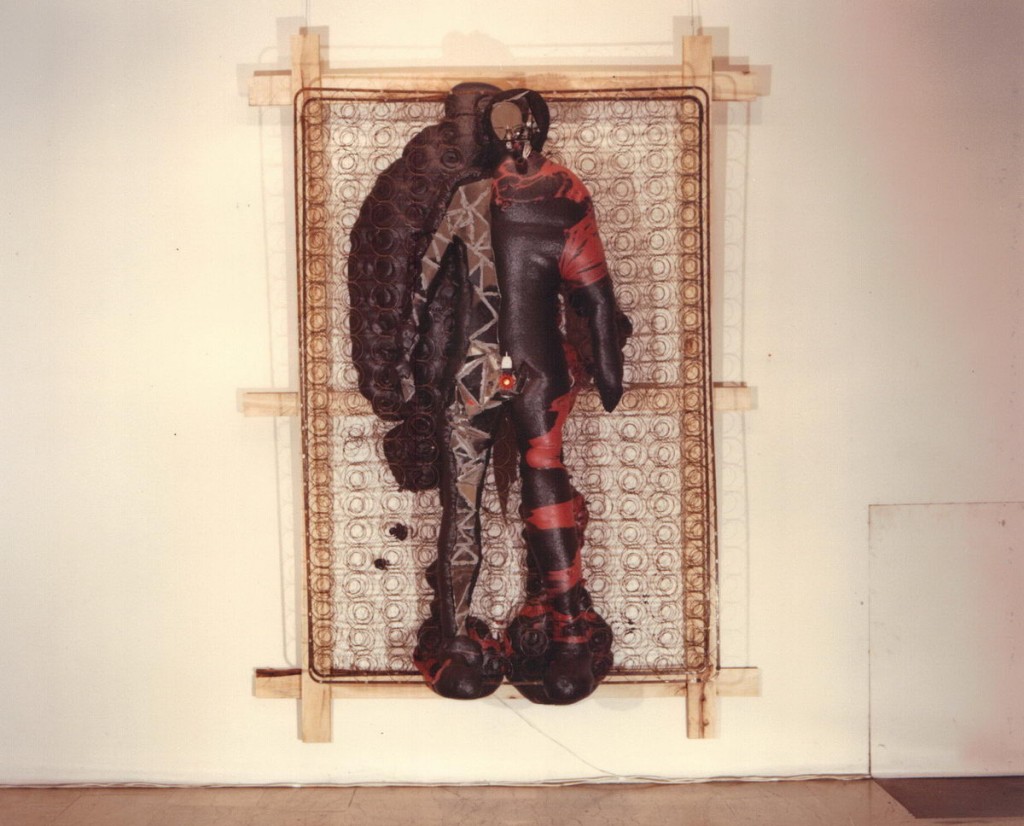 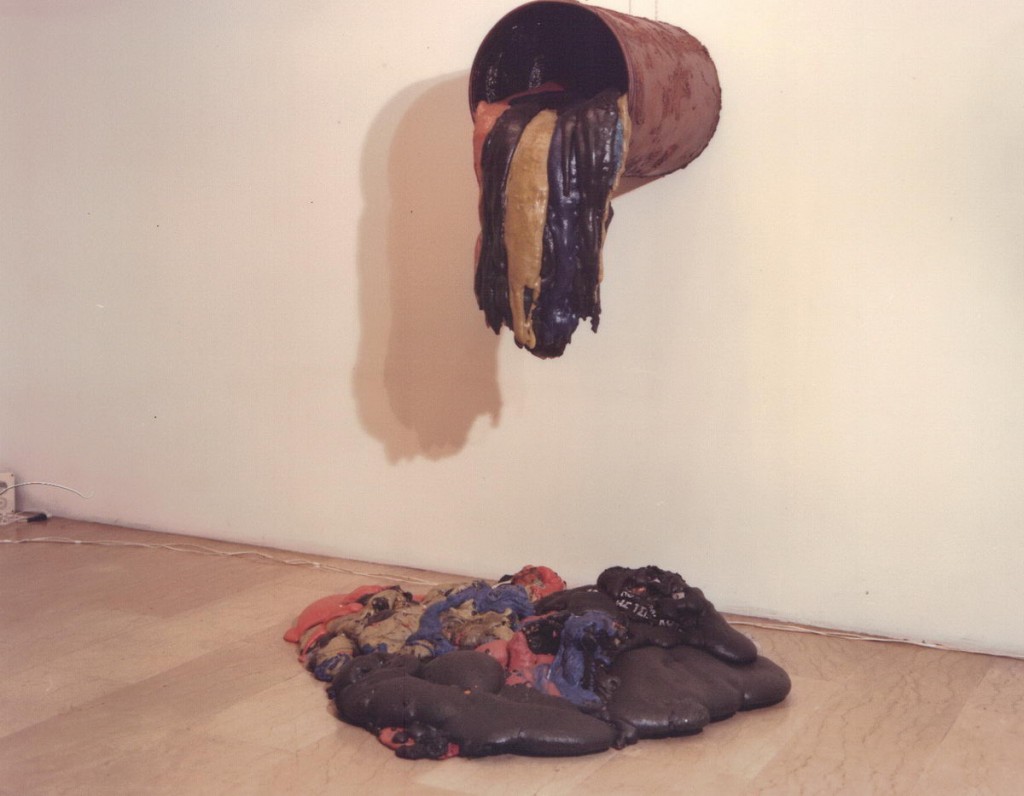 A potent message of the environment’s corrosion is clearly spelled out by Leonidas Tsirigoulis, one of the avant-garde talents of Creek Contemporary art. Experimenting with modern materials – plastic and polyurethane, and their decomposition – his voiced deeply felt protests against unchecked pollution. And he depicts his viewpoints on the dangers of ecological refuse with very provocative constructions.
Tsirigoulis attacks pollution in every form: industrial contamination, oil slicks at sea, TV that muddies the public mind with confusing advertising. Even his own studio is a center o pollution. While working, he wears the dangerous polyurethane fumes, and he of the stops for brief intervals of fresh air. This foam like polyurethane substance comes in spray cans and when mixed with color expands in size. One must work quickly to model it before it hardens. Factory Disposals is a appropriate title for the wall construction depicting an oil drum disgorging a menacing slime that pours out in long hanging tonques. Painted in sickly-green, orange and black colors, it slides down to the ground to form a nauseous pool.

Tsirigoulis, since the early 60s, was one of the first artists in Greece to take art away from the canvas and onto the floor. At that time his constructions were built from objects headed for the trash hear. His protest is further expanded, and very effectively, by a TV set. He shows similar sickly-colored muck oozing out of the major tube and on to an enormous pile on the floor while the screen beaming its “destructive” signals, a strong outcry against media brain-washing.
What could very well be a large oil slick at sea is depicted on a double-paneled white canvas. The polyurethane has been expanded to puffy rhythmic patterns and shapes interweaving over almost the entire surface. Again the colors are pastry ochres and russets, dominated by gray-black. Below, several alphabet letters are thrown at random to evoke advertisements.
The outstanding exhibit of the show, however, is a skeletal apparition called. The Intellectual. Half the figure, made of Styrofoam, is covered with small triangular pieces of mirror embedded into the body. The other half gives the impression of melting away, of deterioration, as the polyurethane trickles out and down to the floor in a red and white mire. The head is a small oval mirror:
A pair of eye glasses rests on the nose which is s spark plug; and where the genitals should be is a little red lamp that lights up. This Intellectual is enmeshed within the springs of a mattress, a victim of the environment and closely resembles a crystallized fossil. It makes a dazzling statement of ecological disintegration.
An assemblage on canvas, called , The Weekend typifies a car accident. The organic swirling curves made by the polyurethane form a labyrinth of patterns all over the surface. Caught in between this maze are license-plates, headlamps, parts of fenders. It is a scream in the dark against the raging recklessness of drivers.