The home of gallery owner Maria Demetriades flirts with the Attican sky, the light and the brilliant white in order to leave the first and the last word to her “precious ones”— the artworks by several major Greek artists. It is exactly like her gallery, Medusa.

Maria Demetriades is the name behind “Medusa”, the name of the woman who is the soul of the well-known gallery in Kolonaki, which has been writing its own art history in the last twenty-seven years. Maria is not a “socialite”, at least in the current sense, but cannot go unnoticed. She is a trim figure, always dressed, in white, who moves in the world with an air of assurance. There is no doubt about her being a dynamic and intelligent woman, cultivated and with a well-honed instinct, who lives through art, with art and for art. Inevitably, her personal space has an “attitude”; an attitude which reflects her view of the world and the personality of this contemporary and—in her own way—demanding woman. Her flat is very close to the gallery, in a modern building which looks on the street where she was born. Alighting from the lift you come before the artworks which have spilled out in the common corridor—Maria’s ‘gift’ to her fellow residents of the building. The flat is high enough to overlook the city, and its facade is essentially an expanse of glass which breaks down the boundary between interior and exterior space. The flowerpots on the balcony seem to form a natural railing which protects without blocking the gaze. They afford a sense of safety as well as the illusion that you can reach out from the couch and touch the plants, since everything that stands on either side of the huge French doors seems to converse with the other elements of a unified space. The white marble on the floors intensifies the impression of continuity, and the light of both day and night brings everything in the house to life. After dark, especially, when the city lights fade into the black sky, something magical eliminates gravity and can take you to the end of the universe if you curl up on the couch and abandon yourself to the moment. As we said, this space looks a lot like the woman who created it: all white, dazzling, abstract and full of art. Luminosity, clean lines, practicality and the bare minimum of utilitarian objects are what turn this place into a hospitable shell for the owner’s many artworks, while feminine tenderness meets a rock mood in a bachelor pad with a strong identity. The works by Apergis, Grigoriadis, Theofylaktopoulos, Zongolopoulos, Zouni, Koulentianos, Linardakis, Massoura, Mavroidis, Xanthou, Prassinos, Rorris, Raymondos, Spentza, Tastsioglou, Tziotis, Trangas, Anton, Stevenson and, of course, the great Takis which keep her company are all the more significant for being creations—‘children’—of her friends. At first sight the flat can be said to be austere, quiet, deliberately neutral, until it starts to reveal its sensibilities which have to do with memories and childhood games, with a general playful mood and a strong yearning for freedom. Nothing in here points to ‘average’—just like the interesting lady who inhabits it. The stark contrast between white and black, the glass and a practical, operating-theatre white kitchen encounter the cheap toys on the bookcase shelves, the private photos, the scattered albums with her beloved cats, the very feminine bathroom and the recherché music that fills the space. Paintings and sculptures abound throughout the house, from the entrance and the sitting room to the kitchen and the hallway. The shell’s total white is only interrupted in the dining room and the bedroom, where the floors are wooden. The spotlights on white rails on the ceiling bring to mind a gallery, but that is the only such element since the works are so varied in style and age and so ‘freely’ laid out, with no restrictive rules or intentions, that they are nothing like an exhibition or even like the collection of an art lover with specific taste and obsessions. Here art ‘lives’ and breathes. You could never say it is exhibited, in either sense of the word. A black settee by Andrée Putman brought over from Paris, a leather armchair of her father’s, a large oval table by Takis and a metal one by ALekos Triantopoulos byt he entrance, a glass table in the kitchen with chairs made of metal and polyester cable, and a bed designed by herself and upholstered with fabric is all that Maria Demetriades needed to furnish her Kolonaki loft which ‘looks down’ on the city. White fabrics and valuable old dining sets, crystal glasses and candlesticks—some of her grandfather’s, some by Takis—plus an armful of fresh flowers are what make the difference and turn everyday life into a precious five-star, five-sense experience. The five Angels of Panos Raymondos, full-size wooden sculptures standing on the invisible threshold between interior and exterior, seem ready to fly into other spheres. The magic of art which opens the gaze and lifts the spirit, becoming food and a breath of life, is best not kept ‘in captivity’ within museums and galleries. It must be present in our daily life and touchable at all times: to be a ‘discourse’ and a priority, exactly as it is in the home of Maria Demetriades. 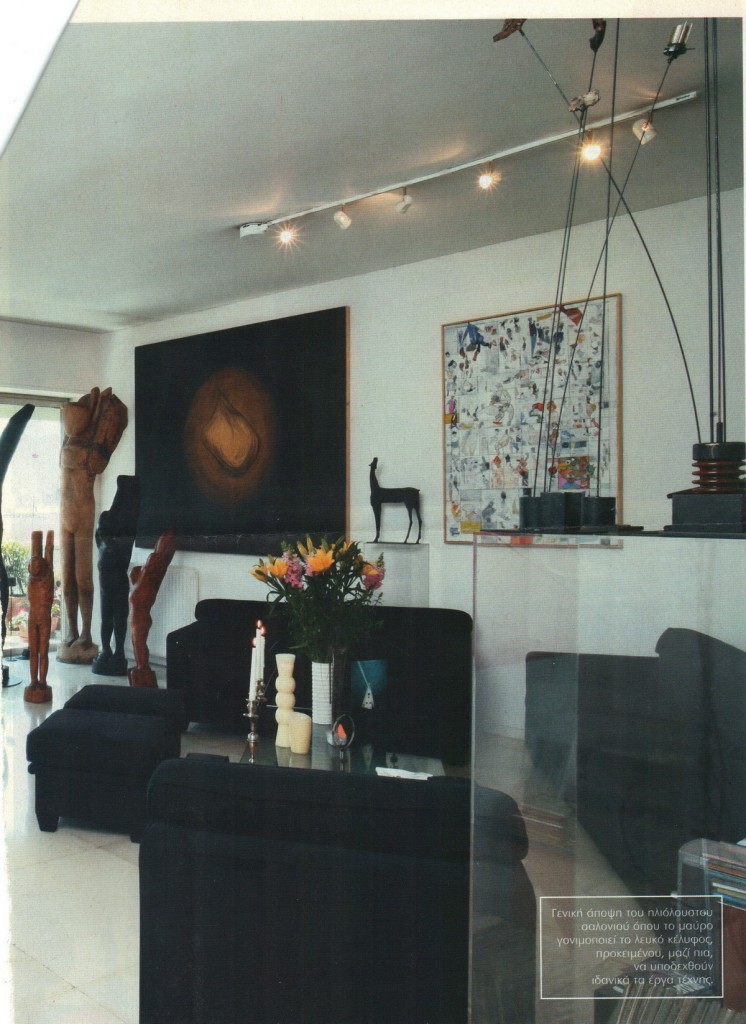 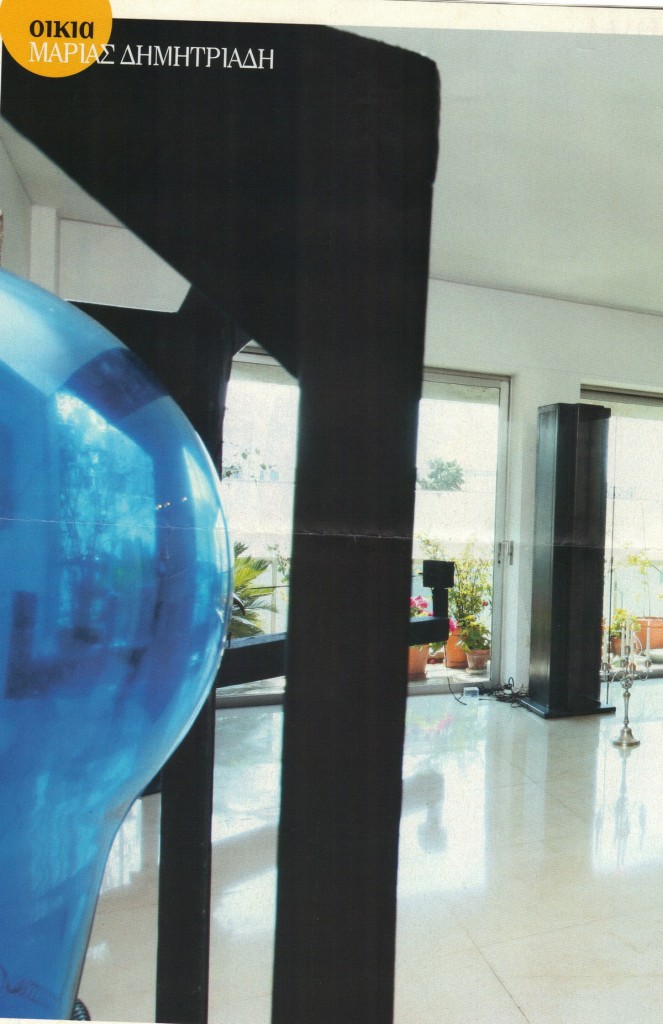 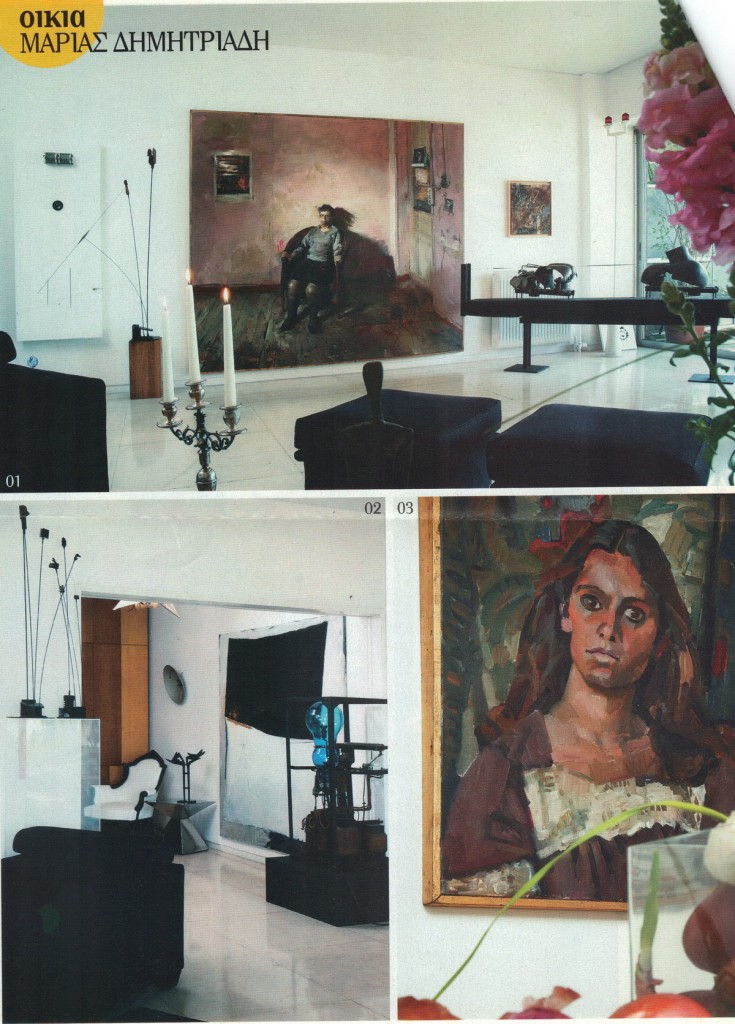