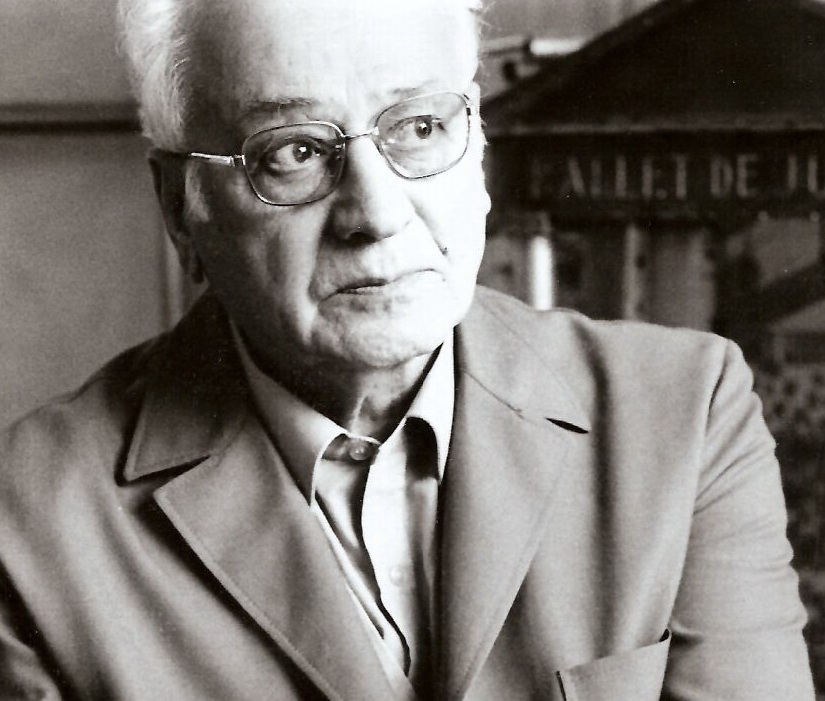 George Zongolopoulos was born in Athens in 1903. He studied sculpture in the Supreme School of Fine Arts in Athens, with T. Thomopoulos as his teacher (1924-1930).

Between 1926 and 1927, he worked in the Department of Restoration of Ancient and Byzantine Monuments for the Ministry of Education. Nevertheless, his interest was not restricted to sculpture. On the contrary, he also engaged in painting and architecture. He worked in the Architectural Department of the Ministry of Education from 1930 to 1938. In that period he designed school buildings and churches. He was a teacher in Sivitanidios School of Arts and Crafts from 1933 to 1944.

In 1936 his works appeared for the first time in a gallery in Athens. After that he held a considerable number of

solo exhibitions, participated in group exhibitions and received several distinctions, not only in Greece but all over the world. Also, he has had many award winning competition entries and commissions.

In 1937 he traveled to Paris where he studied and familiarized himself with the work of Ch. Despiau. He studied works of Romanesque, Gothic and contemporary sculpture. In that same period he met and later on married (1936) the painter Eleni Paschalidou, who was Parthenis’ student. Between 1949 and 1950 he worked at the atelier of the sculptor Marcel Gimond in Paris, with a scholarship granted by the French Government.

From 1952 to 1954, after having been granted a scholarship by the Greek State Scholarships Foundation, he went with Eleni to Italy where he studied bronze-casting techniques (Fonderia Nicci, Rome and Fonderia Domeniccini, Pistoia). He studied the sculpture of the renaissance in Florence and Padova, as well as the work of Michelangelo, Pisano, Donatello, Manzoni, Manzu, Marini, Pomodoro and the Etruscan Art.

He was a member of the select committee of the Greek State Scholarships foundation with the aim of facilitating the studies of sculpture scholars abroad (1957-1959).

He also was a member of the Societé Européene de Culture since 1953 and sat on the executive council from 1960 to 1988 in Biennale of Venice.

In 1975 he took part in a round table discussion on the theme of solitude and communication at the 20th International Meeting in Geneva.

In 1980 he took part the 2nd International Visual Arts Meeting in the European Cultural Centre in Delphi.

Many of his works belong to private collections and Foundations in Greece and all over the world or adorn public places, buildings and squares. Some of his most noted works in public places in Greece are, the Monument to the Heroines of Zalongos (1954-1960), the Monument to the Fallen in the Municipality of Nikaia, (1955), the Cor-ten sculpture outside the International Fair Grounds in Thessaloniki (1966), the Monument to the Cypriot student Kyriakos Matsis in the Aristotle University of Thessaloniki (1967), ‘Diaphragm’ Ethniki Asfalistiki Building (1973), ‘Olive tree’, Alpha Bank in N. Psychiko (1974) , ‘Buckler’, European Cultural Center, Delphi (1989), ‘Umbrellas’ (1997), Thessaloniki seafront, ‘Umbrellas’ (1998), Kifissias Avenue, Municipality of N.Psychico, ‘Atrium’ (1999), Syntagma Square metro station, ‘Omonia’, Omonia Square, (2001), ‘Olympic Rings’, Athens International Airport (2001) ‘Column’, Athens metro Evangelismos (2001).

Zongolopoulos was particularly concerned that his sculptures should co-exist harmoniously with their environment so he frequently collaborated with architects. In the last period of his work, since 1972 the element of motion has remained a fundamental feature of a number of his compositions along with the additional water and sound. His basic sculpting material is stainless metal in a variety of forms combined with objects such as lenses, umbrellas, pipes and rods.

The awarding of the hydrokinetic work ‘Umbrellas’ in the competition for the’ ‘Cour d’ Honneur’ and its installation at the European Council Building in Brussels in 1995, has been quite honorary.

In February 2004 the sculptor established the public welfare ‘George Zongolopoulos Foundation’ located in his home- atelier. He died on 11th May of the same year.

After his death other exhibition took place, such as:

1937 Pedion of Ares: Andreas Miaoulis bust
1947 Monument of Saint George municipality, Piraeus: 1st Prize
1952 Collaboration with the architect P. Karantinos in an architectural contest: 1st Prize for a church with capacity for 1000.
1955 Nikaia Monument: 1st Prize
1954 – 1960 Zalongo Monument, Epirus: Won the 1st prize in a collaboration with P. Karantinos.
1958 – 1960 Omonia Square, Athens: Collaborate with the architect K. Bitsios and won the 1st prize for the configuration of the square with the fountains and the “Poseidon” sculpture. (The sculpture was never installed)
1959 Architectural contest for a school in Ag. Paraskevi, Athens: 2nd Prize
1966 International Exhibition in Thessaloniki: “Sculpture IET”, 1st Prize
1967 Aristotelio University of Thessaloniki: Monument for Kyriako Matsi, a student from Cyprus, 1st Prize
1973 “Diaphragm” sculpture at “Astir” Insurance Company, Athens
1974 “Elia” sculpture at Alpha Bank, Athens
1981 Collaborate with the architect Alexander Tombazis and won the 1st prize in a contest for the configuration of Klathmonos square. (Was never accomplished)
1986 Collaborate with the architect Alexander Tombazis and won the 1st Prize for the Monument of National Resistance of Gorgopotamos (never installed)
1986 Monument for the Fighters of the Resistance placed at the University of Athens for the resistance during the German/Italian occupation: 2nd Prize (There was no first prize)
1989 “Aspida (Shield)” sculpture, European Cultural Centre of Delfi
1991 Monument for the Battle of Crete at Chania, collaboration with the architect Alexander Tombazis, 1st Prize (was never installed)
1993 “Umbrellas” water motored sculpture, Museum of Contemporary Art of Macedonia – Thessaloniki
1995 The sculpture “Umbrellas” was placed on a pontoon at the Grand Canale in Biennale of Venice
1995 The sculpture “Umbrellas” won the 1st prize and was placed at the main entrance of Cour d’ Honneur at the EU and Ministers of the Council building, Brussels
1997 “Umbrellas” was placed at Thessaloniki port for the “Thessaloniki as the Cultural Capital of Europe”:
1997 “Tel – Néant” was placed on pontoon at the entrance of the Biennale of Venice, Riva Dei Giardini
1998 “Tel – Néant” was placed in front of the Hellenic Cultural Institute at Wittenberg Square in Berlin
1998 “Umbrellas”, P. Psychiko, Athens
1999 “Stili (Column)”, Weimar, Germany (Cultural Capital of Europe)
1999 “Aithrio”, Subway Station at Syntagma Square, Athens
2001 “Five Circles”, Omonia Square, Athens
2001 “Olympic Rings”, International Airport of Athens
2001 “Stili (Column)”, Rizari Park, Athens
2001 “Tel – Néant”, OTE building, Maroussi, Athens