An old oil mill at Lefkes, Paros was converted into an island-style … loft, with a few select artworks and designer furniture, by the owner of Medusa gallery, Maria Demetriades.

A regular of Paros for the last thirty years, Maria Demetriades dreamt of owning a house in the specific location of Lefkes—a mountain village untouched by the tourism that swarms the island every summer. The island’s old capital with the traditional houses and cobbled alleys retains the authenticity which is gone from the seaside places and remains lively throughout the year instead of becoming a ghost-town in winter, as Maria comments. At some point in 1985, as she strolled around the picturesque alleyways, she discovered a dilapidated 19th-century oil mill. She was enchanted because the industrial building eschewed the small rooms of traditional Cycladic buildings and had exactly what she was after: large, uninterrupted expanses of interior space. The conversion she designed herself was completed within six years. She had the floors lined with old white local marble, added wooden beams to the ceiling and raised it even higher, to 4m, installed extra windows and integrated to the house the two cisterns outside the old mill. The covered one became her bedroom, and the open one was converted into a bathroom; indeed, the old basin where the olives were washed is now her bathtub! And then there is her personal space of 200 square metres, uninterrupted and with no doors except for the bathroom, with vaults and stone beams demarcating the different functions. She also bought the adjacent piece of land, where she converted the two stables into a guesthouse and a cellar for making her own wine, and created her garden. Where there were once rocks there is now an orchard where she grows lemons, oranges, pomegranates, apricots and peaches, and a large vegetable garden since Maria is vegetarian.

The all-white interior is sparsely furnished with a few, simple and carefully selected designer pieces from the store of Yannis Deloudis, and the tone is set by the artworks of the gallery’s associate artists which are rearranged from time to time. The sitting room, where a large steel and aluminium sculpture by Nakis Tastsioglou stands out, has several different corners to provide comfort and flexibility. Two white sofas by B&B Italia welcome visitors at the entrance, while against the stone wall across the room a white recliner …rests next to a metal filing cabinet which Maria found thrown away outside a police station; this was painted white and now hosts her hi-fi and CD collection. A black-and-white portrait of Maria by Anton, a wooden “Angel” by Raymondos and a magnetic “Erotic” by Takis complete the austere contemporary setting. A stone vault leads to the kitchen and dining area where the table by Takis is surrounded by the white chairs of Verner Panton under the light of an old ship lantern—an ongoing project, as Maria says, where she hangs her collections of coloured glass, talismans, hearts and beads; the only colourful element in the house…. A stone lintel on the other side of the sitting room marks the way to the library and Maria’s bedroom. Next to the books, a simple oblong couch designed by herself has been set ‘into’ the wall under her portrait by Takis, which includes her pets and bears the title “Maria, Knight of Cats”. Two steps lead to the bedroom, where the leather bed stands before a wall painted by Yannis Dimitrakis. Both the space and the mural are doubled by the large mirrored doors of the closet which thus …disappears from the room.

Over the years this house, which features in the album “h” of Konstantinos Dedloudis, turned from a holiday dwelling to Maria’s permanent residence. It is what she considers to be her “home”, whereas Athens is where she works. Nevertheless, she collaborates also with the Fotis Art Café of Naoussa in her beloved Paros, and this year and until the end of October the café hosts an exhibition of Miltos Michailidis. Maria prefers to live here in Lefkes, particularly in winter and in all other non-tourist periods. At the height of summer, when tourism overwhelms the island, she takes her boat and lives at sea, sailing around the unknown coasts of Sifnos, Milos, Kimolos and the other Small Cyclades. 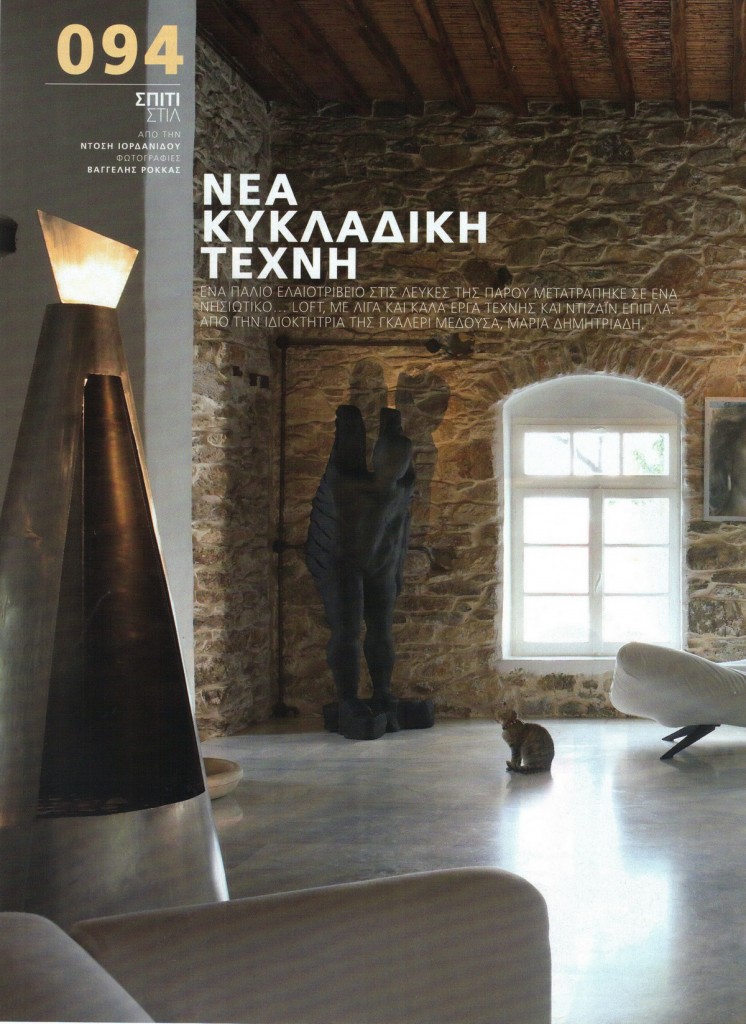 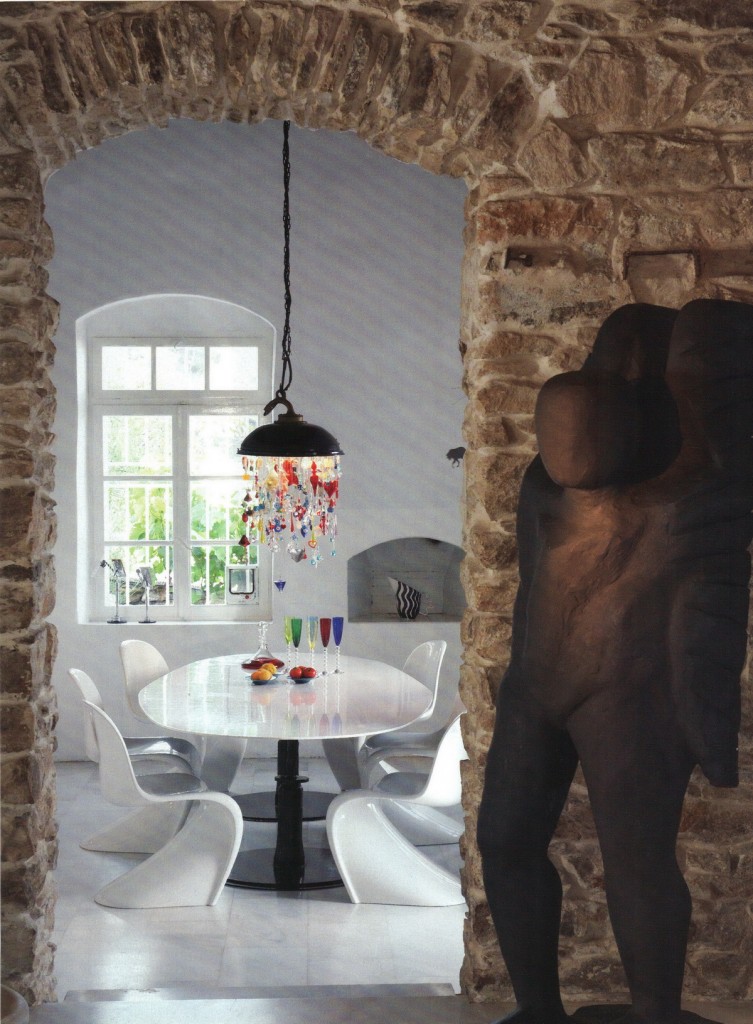 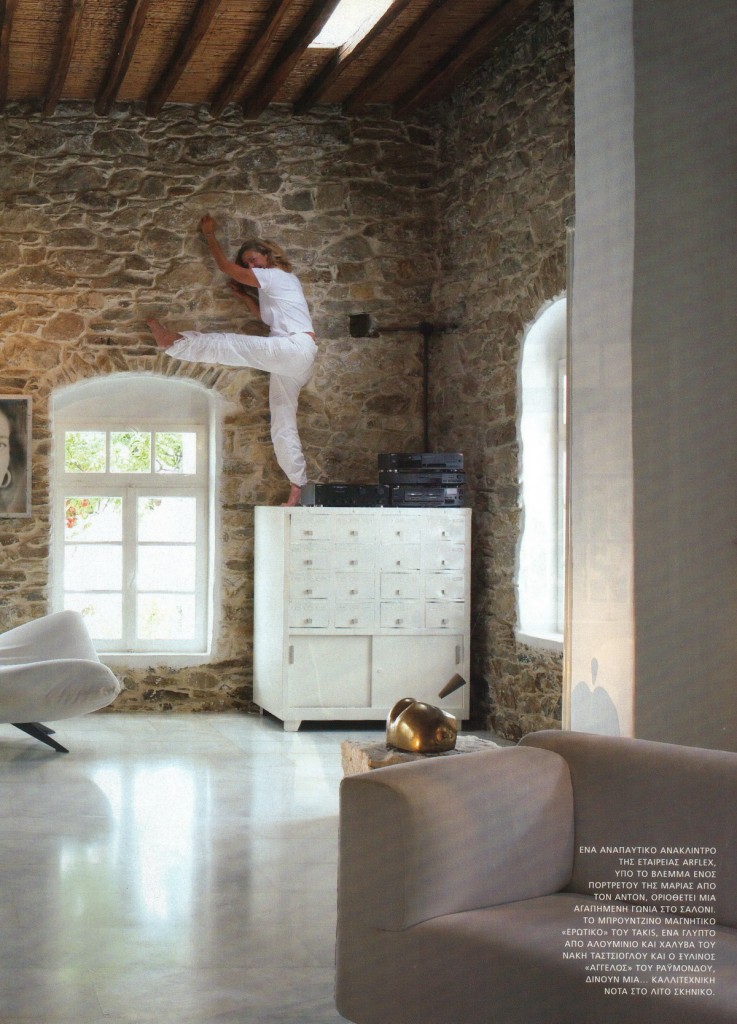 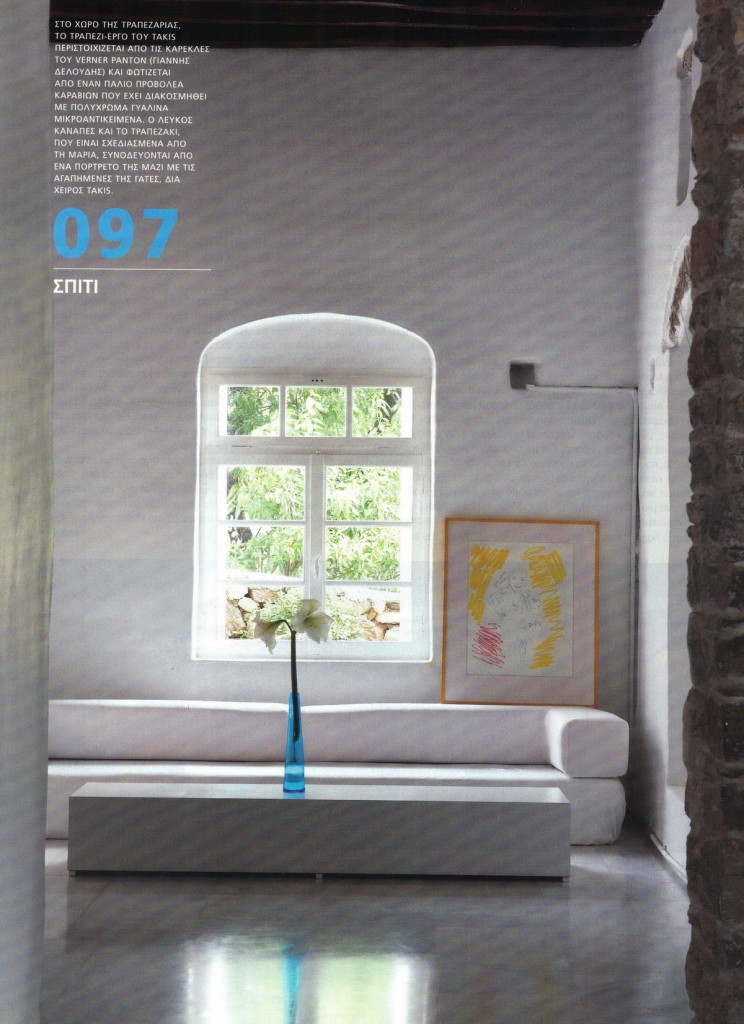