Maria Demetriades is of no Parian origin. Still, she has been spending most days of the week here and as she smilingly says “If I owned a helicopter I would be going to and fro between Lefkes and Athens everyday.
Originally from Kolonaki, in the Athens city centre, the founder of Medusa, the gallery, first visited the island at 18, lying to her parents about “going an excursion with classmates”. It was the very first of the many trips I had been going on all by myself. I was planning to stay a week and ended up staying for a month. I would set out from Naousa in the morning and would get to Piso Libadi from different routes on the way greedily absorbing images, words and smells. In those expeditions I got to know the real Parians, who have been teaching me all about life. In the many summers to follow I always made sure I would return, wherever else I may have been going. The place would attract me like a magnet. Ever since I had been dreaming of a refuge somewhere here.

One more target had to be realized first. Opening an art gallery to house pioneer artists at a time when the avant-garde scene in Athens had been rather marginalized. Maria Demetriades admits “since I was a teenager I had become aware that I was not going to be a good painter. But I had made up my mind to spend my life in art and I knew that without the gallery I wouldn’t have had that opportunity”. Alexandros Iolas, Takis, Alexis Akrithakis, are just some of the great names connected to her endeavour from the very start, making many other to entrust their work with her from Marios Prassinos and Costas Coulentianos to Giorgos Lazogas, Giorgos Rorris, Tasos Mantzavinos, Miltos Michailidis, Maria Vladi.

Our appointment was in Xenocratous Street, a few hours before her flight to Paros, just a few days before the opening of the retrospective entitled “Summing up”, where, with the help of art critic Efi Andreadi, drawings, collages, engravings and small sculptures signed by artists connected to the 35-yeas course of Medusa are being exhibited. With still fresh memories from “Art Athina”, Maria Demetriades finds it “very comforting that thirty thousand people visited the fair, no matter whether they were potential buyers of just art lovers. It’s an institution that we, the older art galleries, have to support”. On her part “I never connected my work with any immediate profit”, she claims “ I have organized a number of exhibitions knowing beforehand that they were not going to be of great financial outcome. I wanted new artiss to coexist in Medusa with the old distinguished ones, and this remains my intention”.

“Summing up” will last the end of July, but the works of Ioulia Ventikou from the section “30 moons” will remain here for the whole year, divided between the two unofficial branches of Medusa, the smaller ones at Fotis Mellios’s Fotis Art Café at Naousa port and the larger ones at Franca Scala in Paroikia. The young painter and stage designer, who has had three personal exhibitions so far thanks to Maria Demetriades, is introducing herself to Parian audiences through some kind of visual calendar, as she has transcribed on canvas thirty phases of a complete mooon cycle, from one full moon to the next, thus uniting the sense of the temporary with the elusive beauty of the moment.

The development Paros has seen the 1990’s resulted in the expansion of the potential clientele of Medusa while in the meantime Maria Demetriades managed to realize her other dream, too. She is now able to enjoy the island twelve months a year and not only in August, which is the high tourist season. “In 1989”, she remembers, “there were at most ten houses in Naousa and I used to eat red mallets, salad and fruit at its one and only tavern, feeling as if I was being looked after by my mother. Paroikia had three cafes and five bars, but it was not the slightest like what it is today. “For sure it was a different island I once fell in love with and it’s a different island I now love!”.

In 1985 she bought a centenarian olive press in the mountainous part of Lefkes and within five years she turned it into heaven on earth, both on the outside and the inside. She showed respect to the old five – metre tall stone structure, she put the old cistern to good use by connecting it to the main building, she hid the insulation work behind wooden beams, laid Parian marble on the floors, left the inside space undivided, and combining the modern and the traditional, she filled each corner imaginative with works of art, structures and furniture designed by herself or her artist friends.

In the once rocky garden, around the stone benches and steps, poplar trees and vines climb high and jasmines and roses emit their fragrances. A feast of colours prevails outside, but inside it’s the domain of white, allowing the creations of Giannis Dimitrakis Annita Argiroiliopoulou, Raymondos, Anton and Emilia Papafilippou to emerge. However, “It’s not a museum”, she insists, “It’s my home”. Nature lover and sworn vegetarian, Maria Demetriades is now able to recognize all sorts of herbs, she makes home made jams, she wanders in the magical little bays of the Small Cyclades on board a small fishing boat that she has converted into a pleasure boat and, aided by technology, she can respond to her professional obligations unhindered.

It’s been a few years that these are not restricted to Medusa. Her Greek and foreign friends who also have their own refuge here, with confidence in her high aesthetics, entrust her with their homes renovations. “It’s about hyper-productions” she boasts. “I’ve got my own work teams for every type of building work and I incorporate works of art in the house design”. Paros has been particularly generous in this activity of hers as well. “The old part of Paroikia from Kastro and beyond is in itself a lesson in Cycladic architecture! Its humble neoclassical houses, surrounded by boukemvilias, are wonderfully incorporated in the environment. I’m really glad this part has remained intact”. 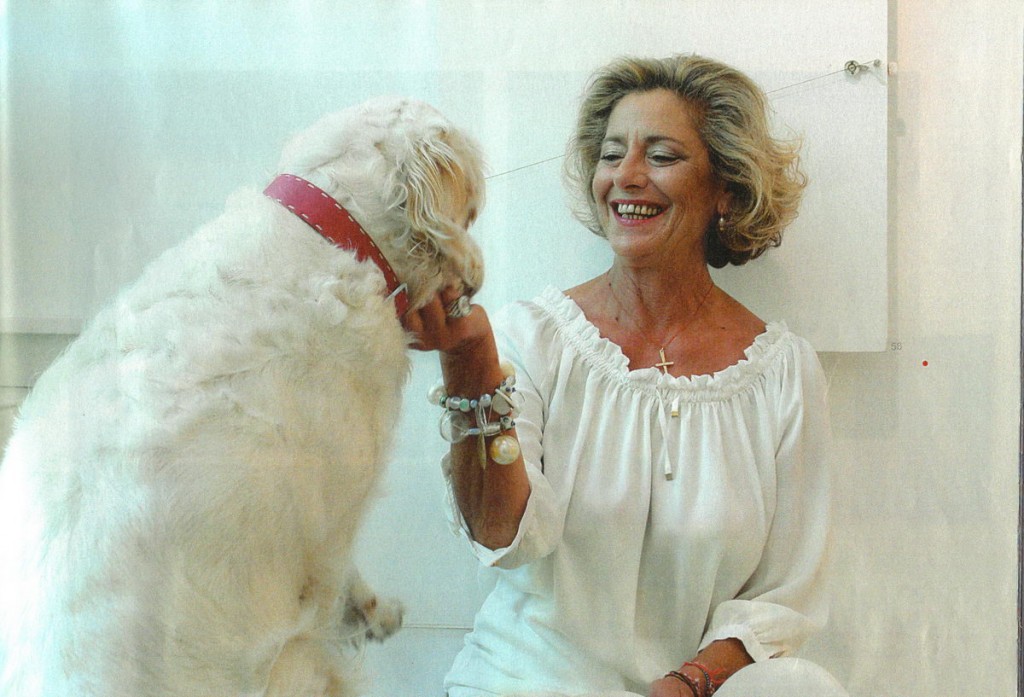 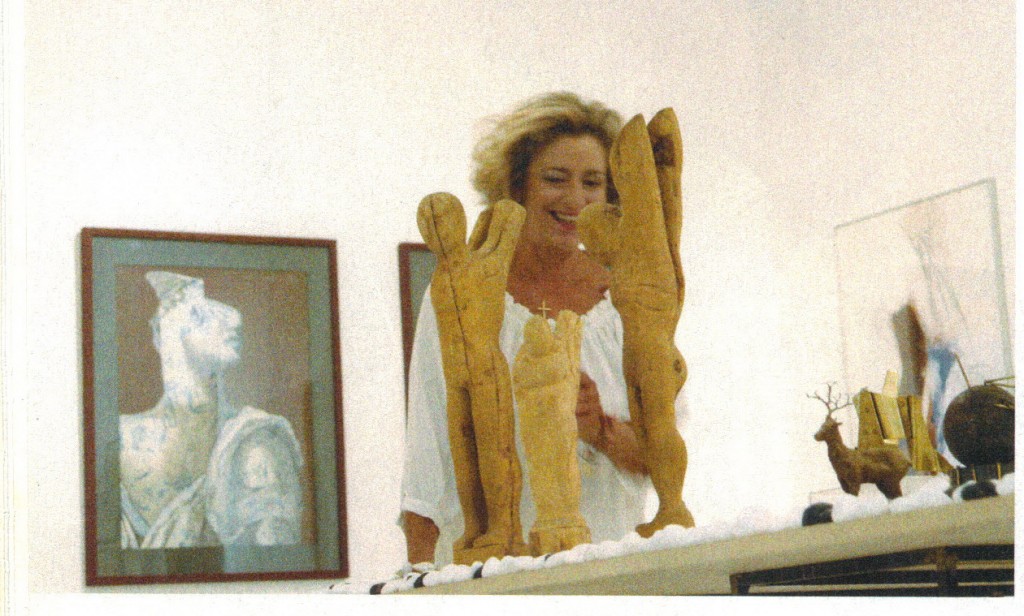 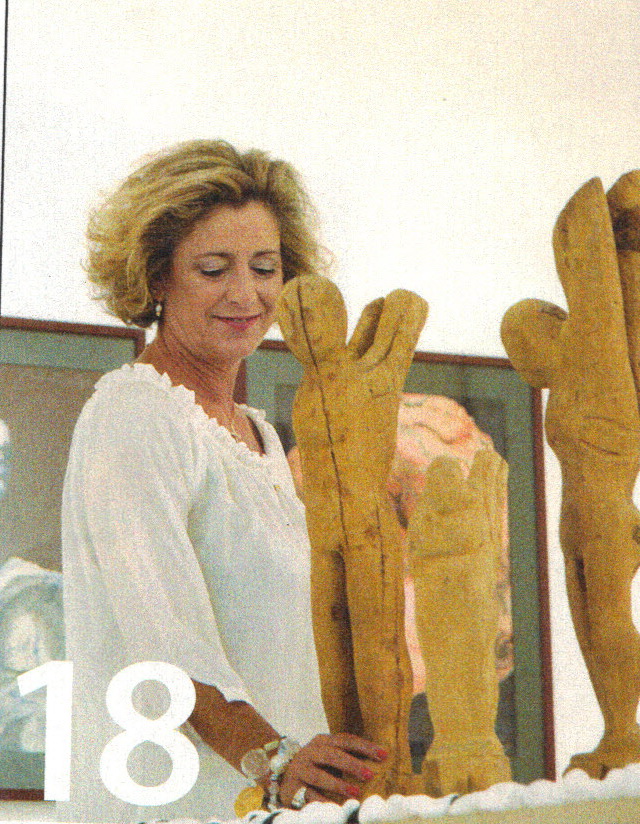